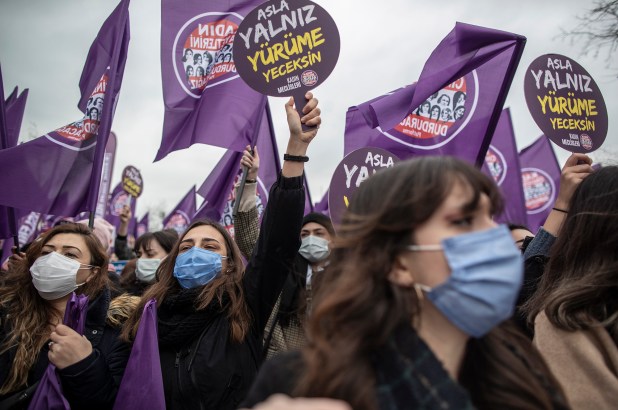 Women hold placards and shot slogans during a protest against Turkey’s withdrawal decision from the Istanbul Convention, in Istanbul, Turkey on March 20, 2021.
EPA

In a blow to roughly half its population, Turkey has exited a landmark treaty giving protection to women.

The Council of Europe’s Secretary General, Marija Pejčinović Burić, called the move a “huge setback” and “all the more deplorable because it compromises the protection of women in Turkey, across Europe and beyond.”

Women’s rights advocates immediately called for country-wide protests. Violence against and killing of women is increasing in Turkey, the AP said.

Officials in Erdogan’s pro-Islam administration have said the treaty threatens conservative values, claiming, among other things, that it promotes homosexuality.

Turkey was the first country to sign the Council of Europe’s “Convention on preventing and combating violence against women and domestic violence” in Istanbul in 2011 and became law in 2014.