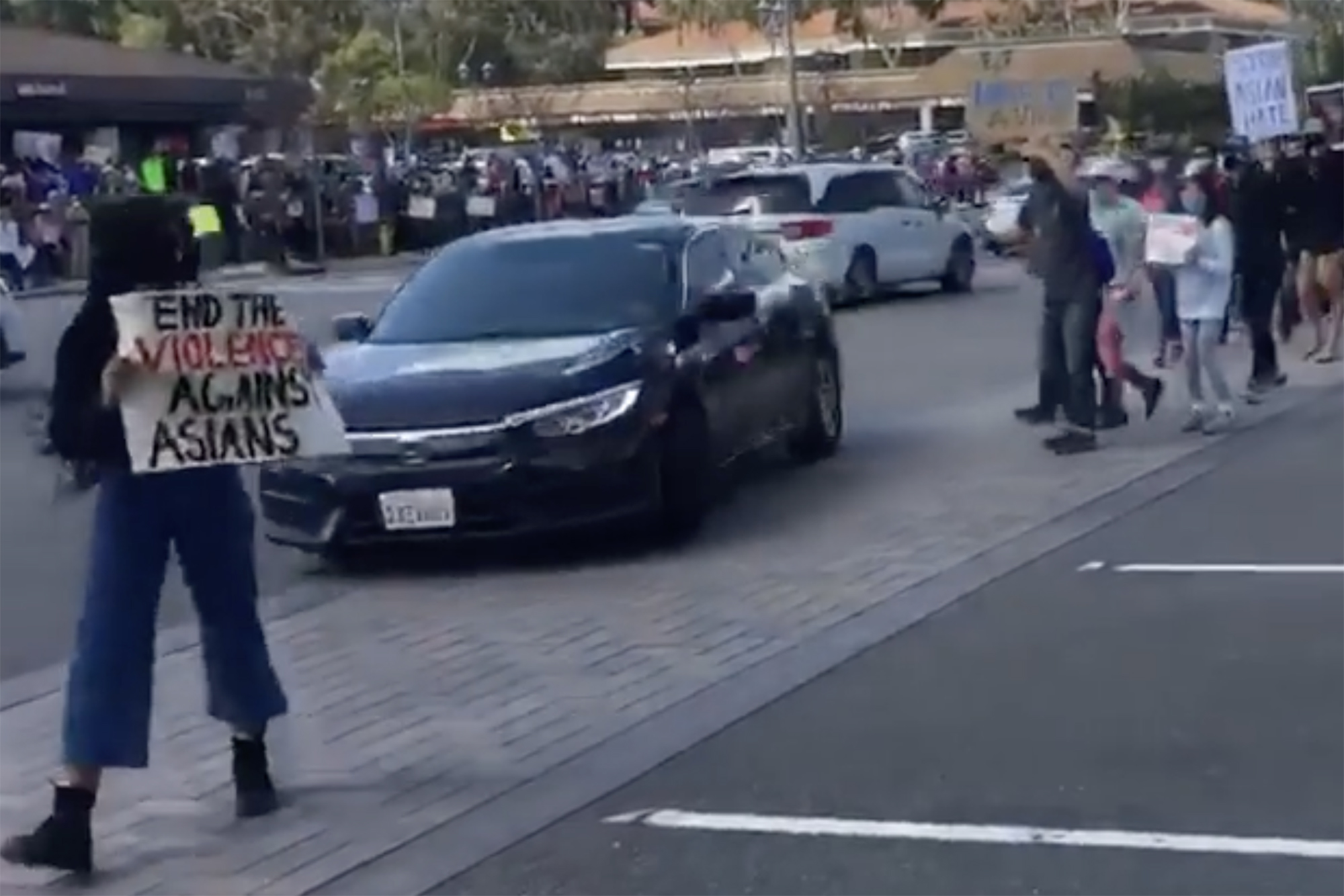 The anti-Chinese slurs made by a man who drove through a group of protesters at a “Stop Asian Hate” rally in California are being investigated as a hate crime, sheriff officials said.

Footage posted to Instagram of the unidentified driver – who cops believe is a white male in his 50s – shows a black Honda Civic cutting off a group of protesters while making a U-turn at an intersection and yelling “F–k China!”

A second video shows the man outside his car while continuing to lob hatred at the group, again saying “F–k China” and telling off others at the rally with the same expletive.

“Hateful acts like this are not welcome in Los Angeles County and must STOP!” Villanueva tweeted earlier Monday.

The suspect drove through a red light and antagonized the demonstrators by yelling racial slurs. No injuries were reported, and the man was last seen driving southbound on Grand Avenue, sheriff officials said in a statement.

“The facts of the incident will presented to the Los Angeles County District Attorney’s Office for filing consideration,” the statement read.

The man’s California license plate – 7XIV483 – was clearly visible in the videos posted to Instagram.

A spokeswoman for the Los Angeles County Sheriff’s Office told The Post no arrests had been made in the incident as of midday Tuesday.

“The brazenness of doing this at an anti-hate rally speaks to the level that people will go to harass and bully communities of color,” Los Angeles County Supervisor Janice Hahn told KABC in a statement.

Lowell Renold, 25, of Orange County, told the Los Angeles Times he went to the rally despite not being Asian to show unity against white supremacy and bigotry.

“There was just so much love and support in the air,” Renold recalled.

Renold didn’t see the man drive between the protesters, but called the incident “really disheartening and sad.”

“I don’t understand how you can look at something like that and feel angry and feel like you’re being attacked,” Renold told the newspaper.

A report released last week by the nonprofit group Stop AAPI Hate found that nearly 3,800 hate-crime incidents were recorded against Asian Americans from March 2020 through February – with nearly half occurring in California.

The charges against Long now reportedly include “malice murder,” which alleges he had express or implied malice against his victims. Long allegedly said “sex addiction” led to the shooting rampage, yet authorities have said they’re still trying to determine a motive.