Rallies across US demand justice for Atlanta spa shooting victims

A diverse crowd gathered Saturday near the Georgia state Capitol to demand justice for the victims of recent shootings at massage businesses and to denounce racism, xenophobia and misogyny.

Hundreds of people of all ages and varied racial and ethnic backgrounds gathered in Liberty Plaza in Atlanta, and in similar rallies across the country, waving signs and chanting slogans.

“I just wanted to drop by to say to my Asian sisters and brothers, we see you, and, more importantly, we are going to stand with you,” Warnock said to loud cheersas passing drivers honked car horns in support.

Robert Aaron Long, a 21-year-old white man, is accused of killing four people inside two Atlanta spas and four others at a massage business about 30 miles (50 kilometers) away in suburban Cherokee County. Six of the eight people killed Tuesday were women of Asian descent. Another person was shot but survived.

Investigators have said Long confessed to the slayings but said they weren’t racially motivated. He claimed to have a sex addiction, which caused him to lash out at what he saw as sources of temptation, according to authorities. Police have said they’re still working to establish a motive, including looking into whether the attacks can be classified as hate crimes.

Georgia lawmakers last year passed a hate crimes law allowing additional penalties for certain offenses when motivated by a victim’s race, color, religion, national origin, sex, sexual orientation, gender or disability. A hate crime is not a standalone crime under Georgia law, but can be used to add time to a sentence of someone convicted of another crime.

“No matter how you want to spin it, the facts remain the same. This was an attack on the Asian community,” said Nguyen, an advocate for women and communities of color. She noted the shooter targeted businesses operated by women of Asian descent.

“Let’s join hands with our ally community and demand justice for not only these victims but for all victims of white supremacy,” she said.

A couple hundred people gathered in a separate Atlanta park and marched through the streets to join the larger rally, chanting “Stop Asian hate” and “We are what America looks like.”

Frankie Laguna, 23, who grew up in Atlanta and now lives in Tennessee, was an organizer of that group. She told the crowd she was the first person in her family born in the U.S. after her mother arrived from Taiwan.

“I’m sick of being belittled and hypersexualized and hated for who I am, for something I can’t change,” she said as the group marched.

Bernard Dong, a 24-year-old student from China at Georgia Tech, said he came out to the protest for the rights not just for Asians but for all minorities. “Many times Asian people are too silent, but times change,” he said. 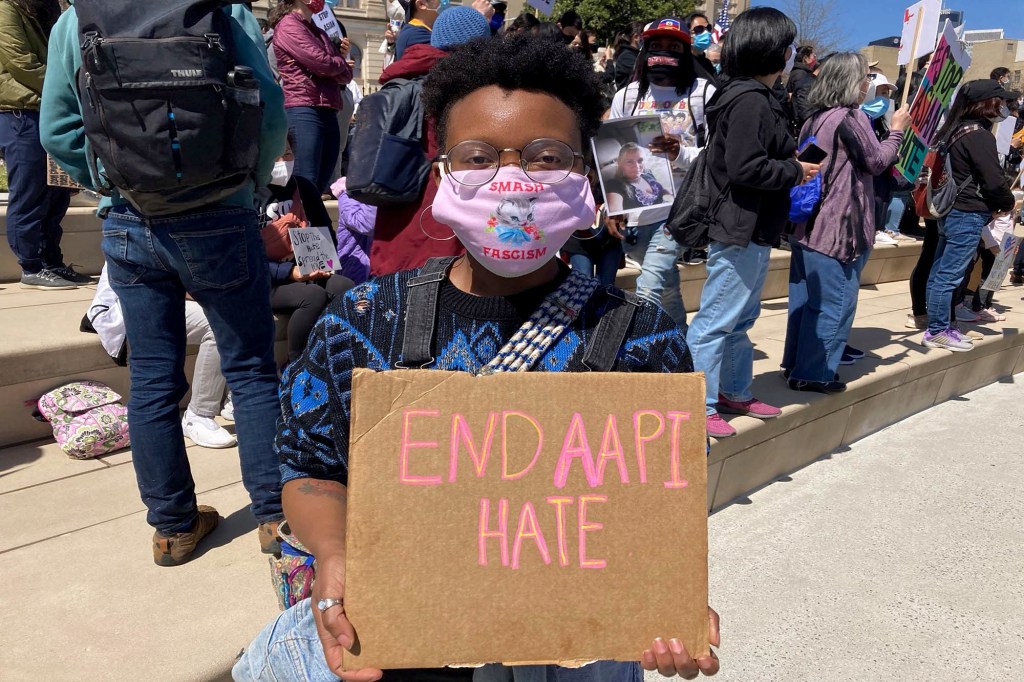 Camden Hunt poses for a picture at a rally on March 20, 2021, across from the Georgia state Capitol in Atlanta. 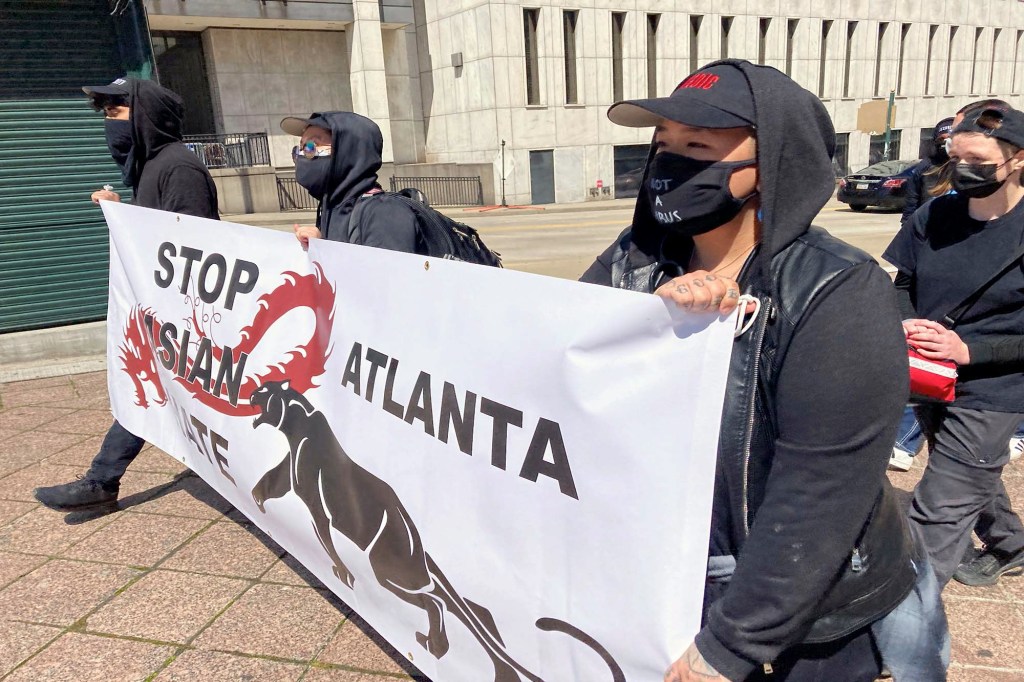 Dong said he was “angry and disgusted” about the shootings, and the violence that persists in 2021 against Asians, minorities and women.

Otis Wilson, a 38-year-old photographer who’s Black, said people need to pay attention to the discrimination those of Asian descent face. “We went through this last year with the Black community, and we’re not the only ones who go through this,” he said.

Camden Hunt, a 28-year-old Black woman, said she first got involved in activism in her native Baltimore. She attended protests over the death of Freddie Gray, a Black man who suffered a broken neck in police custody in Baltimore in 2015. She moved to Atlanta four years ago and got involved in community organizing, last summer pulling together an event to support Black women victimized by police violence.

Hunt joined Saturday’s rally to “show Black and Asian solidarity, ” adding “I think it’s amazing. I look out and I see people of all shades and ages and backgrounds.”

Similar rallies were held from coast to coast. In San Francisco, hundreds gathered in Portsmouth Square, in the middle of Chinatown, to grieve the victims and to call for an end to racist and sexist violence against Asian Americans. The participants waved signs reading “stop Asian hate.”

“I will challenge everyone here … If you see one of our sisters and brothers in need, will you help us?” she said, later yelling into a megaphone: “I am proud to be Asian! I belong here!”

In Chicago, about 300 people gathered and in New York City, hundreds marched from Times Square to Chinatown, news outlets reported.

Wilson leads US to quarters with 93-82 win over France