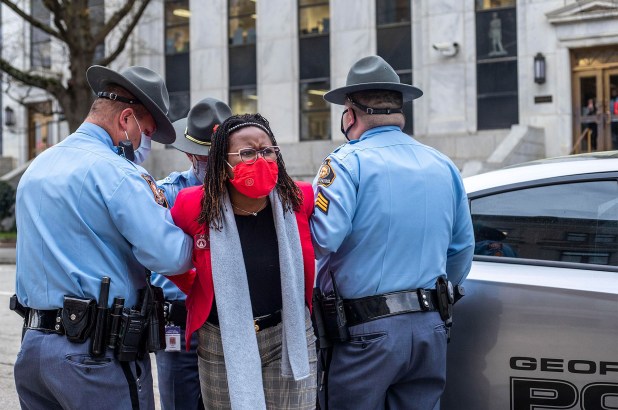 A bill backed by the Georgia GOP that will overhaul election protocols in the state was signed into law Thursday.

The legislation includes new restrictions on voting by mail, and increases legislative control over elections in the state.

Opponents claim the measure is a needless reaction to former President Trump’s claims that widespread voter fraud in the state lead to his defeat there in the 2020 election.

Georgia — a traditionally red state — narrowly voted for President Biden and two Democratic US Senators amid record-breaking turnout in the last election cycle.

The new law limits the window in which absentee ballots can be requested, and cuts the number of locations and times ballot drop boxes can be accessed.

The measure also gives the Republican-led senate and house more control over election administration, including the option to appoint the chair of the election board and remove and replace county election officials.

The new law will also cut the time frame for runoff elections and ban groups from handing out food and water to voters.

Georgia Gov. Brian Kemp was delivering remarks after signing the bill when he was interrupted by a ten protestors, including two lawmakers, outside of his Atlanta office.

Kemp, a Republican, asked an aide “what’s the problem,” before a livestream of the ceremony went dark.

State Rep. Erica Thomas, a Democrat, who is black, was arrested after knocking on Kemp’s door during his speech.

The measure was filled with “voter suppression tactics,” a top Democrat said.

“We are witnessing right now a massive and unabashed assault on voting rights unlike anything we’ve seen since the Jim Crow era, Senate Minority Leader Gloria Butler said.